June 29, 2016: Should Driverless Cars also Be Borderless? In Journal of CNRS.

On May 28-29, 2016: We have been participating in the international GCDC – Grand Cooperative Driving Challenge 2016. The competition – consisting of three different traffic scenarios – was held on the A270 highway between Helmond and Eindhoven in The Netherlands. The three trials were all about testing the ability of the self-driving cars such as: merging two rows of vehicles up to one, automated crossing and turn at an intersection and automatically give way to an emergency vehicle.  See on WebTV UTC (in French). 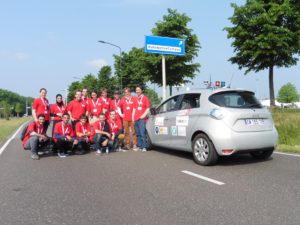